Records of the American and Canadian 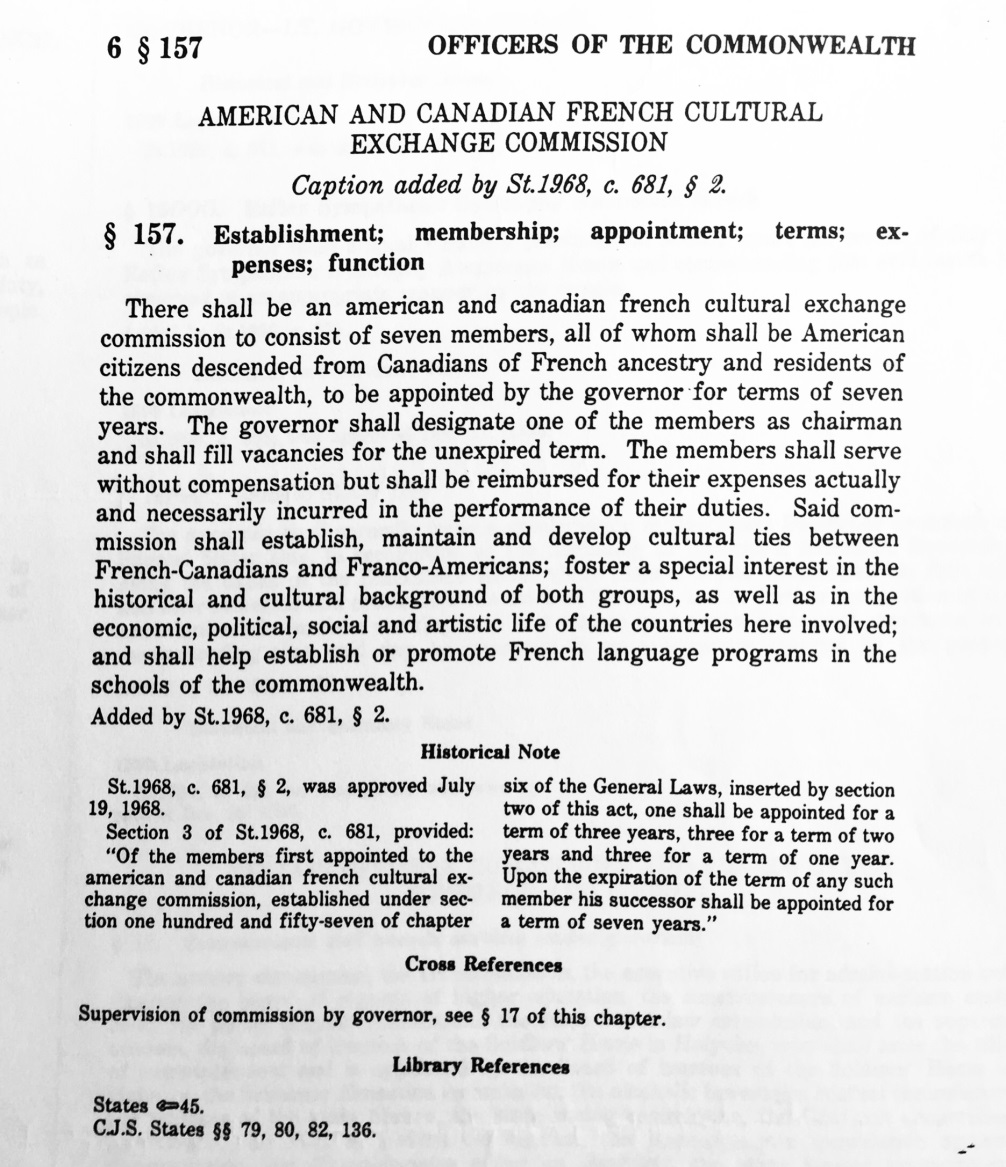 Abstract: Papers and materials related to initiatives involving the American and Canadian French Cultural Exchange Commission, as well as to the Commission’s founding and function.

Access: Materials are available to researchers without restriction unless otherwise noted.

According to a pamphlet dedicated to the American and Canadian French Cultural Exchange Commission, its mission was to:

1. …bring the Franco-Americans of the Commonwealth a better knowledge of:

a. French and Canadian History [;]

b. the process of American acculturation in Massachusetts in all its phases;

c. the implications and requisites of our own American way of life in the Commonwealth of Massachusetts in all dimensions of our culture: economy, politics, social life and the arts and also, life in French-Canada of today.

2. to set up institutions and programs of exchanges in the fields of business, imports and exports, population migration, arts and sciences.

3. to conduct a comprehensive survey of French language programs offered in public and private schools of the Commonwealth; establish or improve French programs, as needed.

5. establish scholarship funds, summer camping exchanges, vacation tours, camper visits and performances for actors and artists, lecture tours for teachers, both from the Commonwealth and French-Canada.

Scope and Content: The American Canadian French Cultural Exchange Commission (ACFCEC) Collection contains reports, memos, meeting minutes, publicity materials, and correspondence relating to 2 general operations of the Commission, as well as to specific initiatives, such as the effort to create a French Canadian Studies program at North Adams State College, and the work to create a French Heritage Trail guide to relevant points of interest in Massachusetts. Also included are minutes from meetings of both the ACFCEC Commission and the associated Advisory Committee.

This series contains documents related to the founding of the ACFCEC, its reason for being, its governance, and its aim. Meeting announcements and minutes from both the Commission, as well as the Advisory Committee, are also included, as are Reports of the Commissioners.

This series includes documents related to work to create a French Freedom/Heritage Trail in Boston, MA; survey materials to assess the activity or inactivity of Franco-American groups and organizations; contact and demographic information for Franco-American elected officials, and about the distribution of the Franco-American population in Massachusetts. Also contains papers given, surveys taken, and statistics regarding the use and teaching of the French language, and various ethnic heritage preservation efforts, meetings, and conferences. Additionally, informational 3 booklets from several arts associations and councils are present, including information for grant seekers.

Addressing an area that ACFCEC identified as a priority of the Commission’s work, this series contains documents, mainly correspondence, regarding the establishment of a Canadian Studies Program at North Adams State College. Descriptions of similarly focused programs at other institutions, such as the University of Vermont, Johns Hopkins University, and Duke University, were used to inform the proposed program and are also included.

Includes news releases, event announcements, and letters regarding appointments of and visits from officials in the Quebec government. Also includes documentation regarding the New EnglandQuebec exchange student program, an agreement on cultural cooperation between the state of New Hampshire and the government of Quebec, as well as information about a visit by representatives from Quebec to Concord, NH and Boston, MA.

Contains programs from and fliers related to various presentations, exhibits, and celebrations, many of which were held in celebration of Lafayette Day. Among the materials relating to events that took place at the Massachusetts State House are: a program for the “French Bicentennial Celebration of Ethnic Days”, and a flier for a display of a “Computerized Land Registry Index and Standard Property Maps of New Brunswick, Nova Scotia, and Prince Edward Island”.

This series focuses on works in print; sometimes the works themselves, and sometimes publicity materials describing available works. Included are price lists, a copy of Richard Santerre’s The Franco-Americans of Lowell, Massachusetts, and several newspaper clippings and photocopies, including some relating to the awarding of the French Legion of Honor to Dr. Claire Quintal.

Includes announcements about and invitations to events and talks hosted by other Franco-American organizations. Also included are collected newsletter and newspaper issues, such as InformACTION, Quebec Update, and the Bulletin d’Information from the Alliance Française des États-Unis. There are also programs for, notes from, and talks given at events hosted by Assumption College’s French Institute, and descriptions of and brochures for several Franco-American financial institutions in Massachusetts.

Contains correspondence belonging to Normand Ouellette that is unrelated to ACFCEC activities; handwritten rough drafts and notes for various writing projects, including one with the working title “Paper”; as well as items truly miscellaneous in nature, from publicity kits for a French Café Concert performance reenactor, to information regarding Boston’s Center for International Visitors, to a brochure promoting the learning of French, and the preliminary program for the American Society for Public Administration’s 48th national conference.