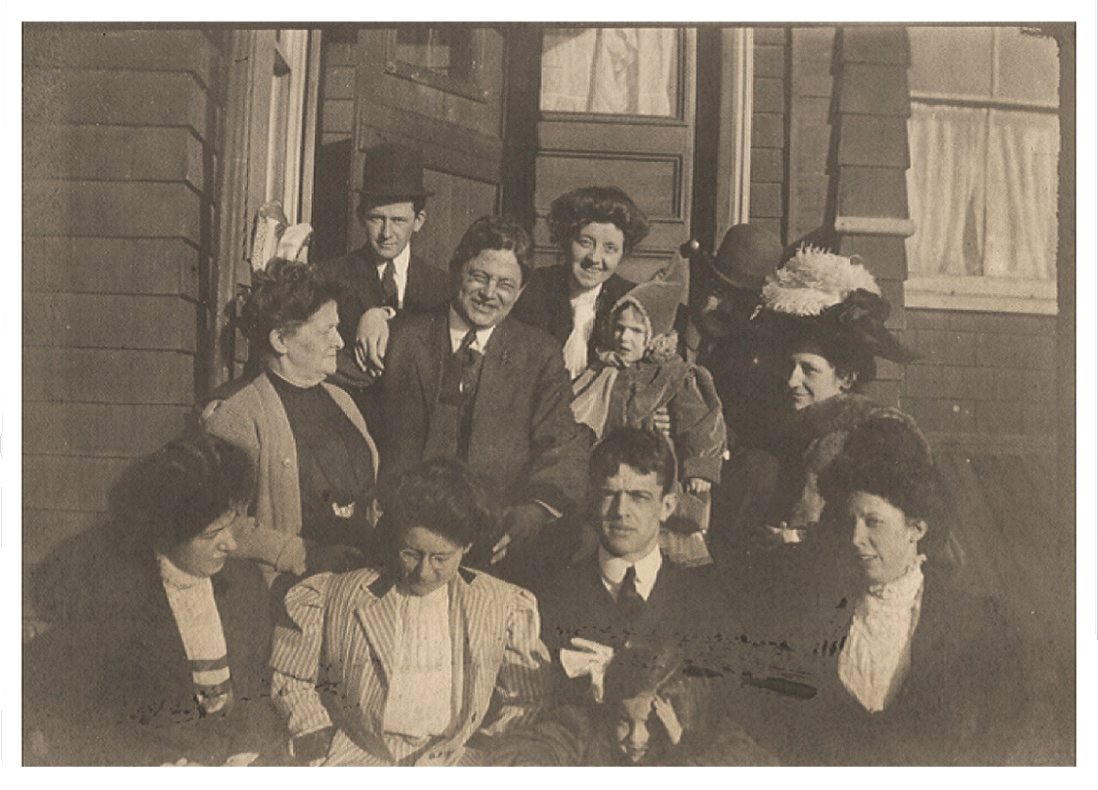 Abstract: Correspondence, biographical notes, memoirs, a diary, artwork, photographs, legal and financial records, genealogical material, military records, news clippings, and mementos documenting the professional and family activities of Joseph Jobin (1843-1890), his wife, Marie-Flore-Eugénie Lapointe Jobin (1847-1938), their nine children, descendants, and other relatives in Québec and New England from 1890 to the present day. Although the collection focuses on various members of the family, the material centers on the nine Jobin children, and as a whole reflects the close ties between family members living in Canada and the United States. The collection spans the twentieth century and illustrates Franco-American immigrant life as experienced by one family. Of the Jobin children, two became artists, both of whose work reflects their French-Canadian heritage. Another son was active in Franco-American affairs while living in Boston, and another became a professor of French Language and Literature at the University of Michigan. Of particular note are materials relating to the Jobin family’s wartime experiences, including correspondence, records, commendations and ephemera from both World Wars.

Scope and Content: The Jobin Family Archives contain materials collected by family members and compiled by Rev. Philippe Thibodeau. The bulk of the collection includes correspondence between family members in New England and Québec from 1890 to the present day. Of particular note are two extant letters by Joseph-Jobin to his family in Québec from Boston that pertain to his immigration in 1890. Also of note, is an extensive collection of artwork by Théodore and Marie-Eugénie Jobin, two copies of an unpublished manuscript, The History of Fashion, by Marie- Eugénie Jobin, a collection of rare books acquired by Louis Jobin, proprietor of Schoenhof’s Foreign Books in Cambridge, MA., and letters from youngest son, Gustave Antoine Jobin, to his mother and other relatives from the Western Front during World War I.

Related material: Most of the original documents are in French with supplementary material compiled and transcribed in English by Rev. Philippe Thibodeau (grandson of Théodore Jobin). This includes two copies of Family Notebooks, a three-volume family history and memoir by Marie-Eugénie Jobin, and The Jobin Family Archives: Memoirs and Other Writings relating to the Family of Joseph Jobin and Marie-Flore Eugénie Lapointe. Both manuscripts, based on original documents in the collection, relate to the immediate family, and other descendants and relatives. Rev. Thibodeau also included in the collection his manuscript on the Thibodeau family, related to the Jobin family by marriage. Books donated to the French Institute from the private collection of Louis Jobin, proprietor of Schoenhof’s Foreign Books in Cambridge, MA., have been cataloged individually and can be accessed by call number or or as a keyword search: "Jobin Family Archives" in the Library Catalog.

Restrictions: The collection is available to researchers and other interested parties. Permission for use or reproduction can be obtained from the director of the French Institute, and is subject to the Institute’s user policies.

Processing Information: This collection was processed by Eugenia Tsantinis in 2010

Indexing Terms: The following terms are used in the Library Catalog to denote items related to this collection: "Jobin Family Archives" ; "Jobin Family".

Joseph Jobin (1843-1893): The family patriarch was born in Saint-Augustin, Québec in 1843. He married Marie-Flore- Eugénie LaPointe in 1872 and moved their family of nine children to Boston in 1890. He died of tuberculosis in Boston in 1893. The collection includes two letters written by Joseph Jobin in August and September of 1890 from Boston to his family in Québec.

Marie-Flore-Eugénie Lapointe Jobin (1847-1938): Known as the ‘Belle of Kamouraska’, outlived her husband, Joseph, by 45 years, and remained in Boston after leaving Québec. A registered nurse, she was born in 1847 in Ste. Anne-de-la Pocatière, Québec and died in Boston in 1938 at the home of her daughters Marie-Eugénie and Jeanne. Most of her correspondence is to her children, and granddaughter, Estelle Jobin Thibodeau, whom she helped raise after the death of Estelle’s mother, Emily Petersen, in 1910. Her “Petit Journal” or last testament is also included in the collection.

Théodore “Theo” Jobin (1873-1955): Theo, the eldest of the Jobin children, accompanied his father and brother, Louis-Joseph to Boston in 1890 ahead of the rest of the family. He was an artist of note in Boston. He married Emily Petersen and they had one child, Estelle Jobin Thibodeau, mother of Rev. Philippe Thibodeau. Much of his correspondence is undated. The collection includes paintings, etchings, drawings and examples of his professional artwork and associations.

Louis-Joseph Jobin (1874-1943): Louis Jobin, a book dealer and owner of the French Bookstore, Schoenhof’s, in Boston, was active in civic and Franco-American life in New England. He married Marie E. “Mimi’ Bouchard of Worcester, MA and they had two children, Lucille Jobin and Louis Jr. Jobin. There is scant correspondence from Louis-Joseph, but the collection includes tributes to and a framed photograph of him. The collection also contains correspondence from his children.

Anne-Marie Jobin Davies (1875-1945): Anne-Marie Jobin, the eldest Jobin daughter, married Paul Davies. They had one child, Paul Davies, known as “Le petit Paul”, who died in childhood. Much of her correspondence is to her sisters, especially her sister Emma in Québec. Of particular note, are several letters concerning the illness and death of her only child as a result of appendicitis. She became a successful businessperson, and after her divorce, lived for many years with her brother Eugéne at Chanteclerc Farm in Oak Lawn, Rhode Island near Providence. Much of her correspondence is undated.

Marie- Eugénie Jobin (1877-1959): Marie-Eugénie, also known as “Nini”, was an art teacher, writer, amateur biographer and historian, and artist. She never married nor had descendants. The collection includes correspondence with her sister Emma in Québec to whom she remained close throughout her life, and with other relatives. “Nini” was the historian in the family, following the example of her uncle, the priest Désiré Jobin, who also wrote his memoirs, now lost. The collection includes professional writings, essays and short stories, original artwork, an unpublished manuscript on the history of fashion, a three volume family history, a pageant written and staged for the tercentennial founding of Boston, and a three- act play on Gilbert Stuart, the American painter known for his portrait of George Washington.

Emma Jobin LaRocque (1879-1962): Emma married Hector LaRocque and returned to live with him in Montréal. They had five children: Hector (1906-1985) a priest of the Ottawa-Hull diocese; Marcel (1916-1995); Jeanne (1908-2002); Paul (1910-202) and Eugène (b.1919). Paul and Marcel married and had large families. Eugène, seriously injured during WWII, married but never had children. Jeanne did not marry. Emma was the recipient of a significant number of outgoing letters from her siblings in the United States. The collection also includes letters and writings from Emma’s children, particularly Jeanne who remained close to her relatives in New England.

Eugène Jobin (1883-1952): Eugene never married. He was the rural mail carrier in his community, and lived with his sister Anne-Marie Jobin Davies at their farm, Chanteclerc Farm in Oak Lawn, Rhode Island near Providence, the scene of many important family gatherings.

Marie-Marguerite Jobin Gravel (1884-1974): Marguerite married Edouard Gravel (1883-1959), a successful financier from Montréal. They had five children including their firstborn Antoine, (1918-1923) who died in childhood having contracted scarlet fever while Marguerite was visiting family in Boston. Her four surviving children included Louis (1920- 1993), Jean (b.1924), Marie (1926-1997), and Marthe (c.1922.-2000). Both Louis and Jean saw active military service in WWII. Marthe married Jean Ducharme (1914-1982) and they had five children. The Gravels raised their family in Montréal. The collection includes one letter from Marguerite on the illness and death of her sister Anne Marie’s son, ‘Le Petit Paul’, which she sent from Providence to her sister Emma in Québec. The collection also includes letters from the Gravel children as well as a series of photographs of the Gravel summer home in Québec.

Jeanne Jobin (1887-1958): Jeanne never married and had no descendants. She was the primary caretaker of her mother Marie-Flore-Eugénie Jobin and for many years shared an apartment with her sister Marie-Eugénie at 20 Clearway St. in Boston. While her family wrote to her in French, she corresponded in English; however, the collection contains two letters written in French in 1904.

Gustave “Antoine” Jobin (1889-1972): Antoine became a Professor of Foreign Languages and Literature, at the University of Michigan, Ann Arbor. He married Ada McBride, and they adopted one child, Ada Mae (Hardy). His mother, Marie-Flore-Eugénie Lapointe Jobin, kept many of his letters found in her personal papers after her death. Of special interest, is his World War I correspondence written from USA army training (Interpreter’s corps) in Europe. Antoine served as interpreter at Versailles to U.S. General Ford who toured the French battlefields after the war. The experience marked Antoine for the rest of his life and he became a pacifist.

Estelle Jobin Thibodeau (1904-1985): Estelle was the daughter of Théodore Jobin and Emily Petersen, and granddaughter of Joseph and Marie-Flore-Eugénie Jobin. She married Ralph Joseph Thibodeau in 1934, and they had two sons including Rev. Philippe Thibodeau. She corresponded in both French and English. The collection includes a substantial number of letters to her cousin and lifelong ‘friend and confidante’, Jeanne LaRocque in Québec,

Rev. Philippe Thibodeau: (b.1945-): Rev. Thibodeau is the son of Estelle Jobin and Ralph Thibodeau. He is a priest in Halifax, Nova Scotia. He is the creator of the Jobin Family Archive and has supplied most of the supplementary material relating to it. In this picture, he is with his mother (left), and godmother and Emma Jobin’s daughter, Jeanne LaRocque.