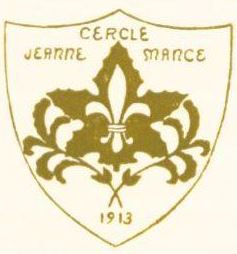 Background Note: Le Cercle Jeanne-Mance de Worcester was a social and educational club for Franco-American women, founded in 1913. Within a year, it had more than 100 members. Named for Jeanne Mance, a laywoman who came from France to Montreal in 1642 to establish a hospital in the new settlement, its goals were to “promote the advancement of its members in the study of the French language, religion, sciences, and literature.” During the two world wars, club members also contributed to the war effort through their charitable initiatives. From 1917, Le Cercle Jeanne-Mance awarded prizes for excellence in French to students in Franco-American schools; in 1955, it created a scholarship for a young Franco-American woman to study French at Anna Maria College in Paxton, Massachusetts. Club activities included musical and dance performances, commemorative exhibits and pageants, French classes, lectures, films, debates, and banquets. Le Cercle Jeanne-Mance de Worcester served as a model for other Franco-American women’s clubs in New England, including Le Cercle Marie-Louise de Woonsocket, R.I., L’Auxiliare du Cercle Canadien de Southbridge, and the eponymous Cercle Jeanne-Mance de Lowell, founded in 1931 and, unlike its model, still in existence in 2018.