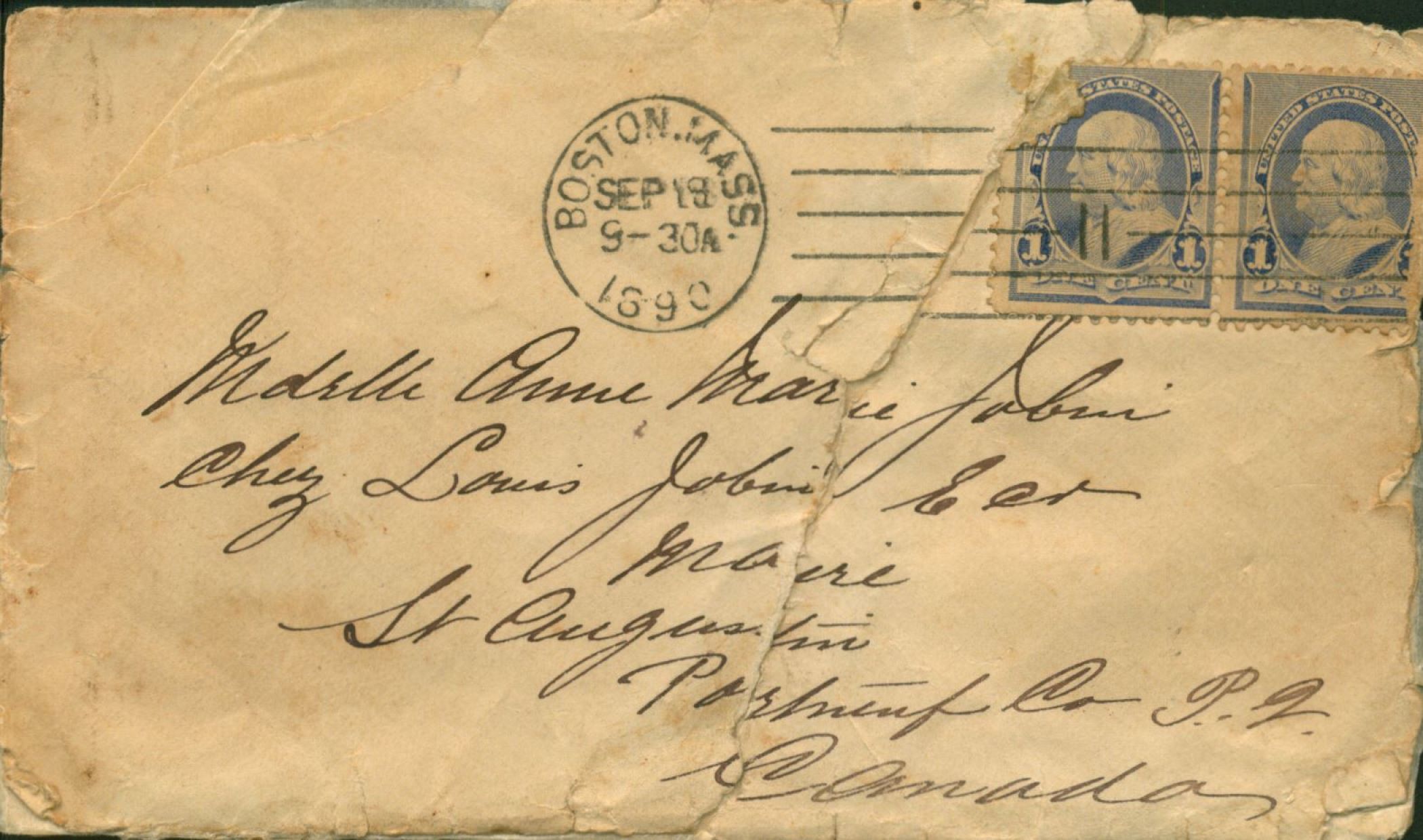 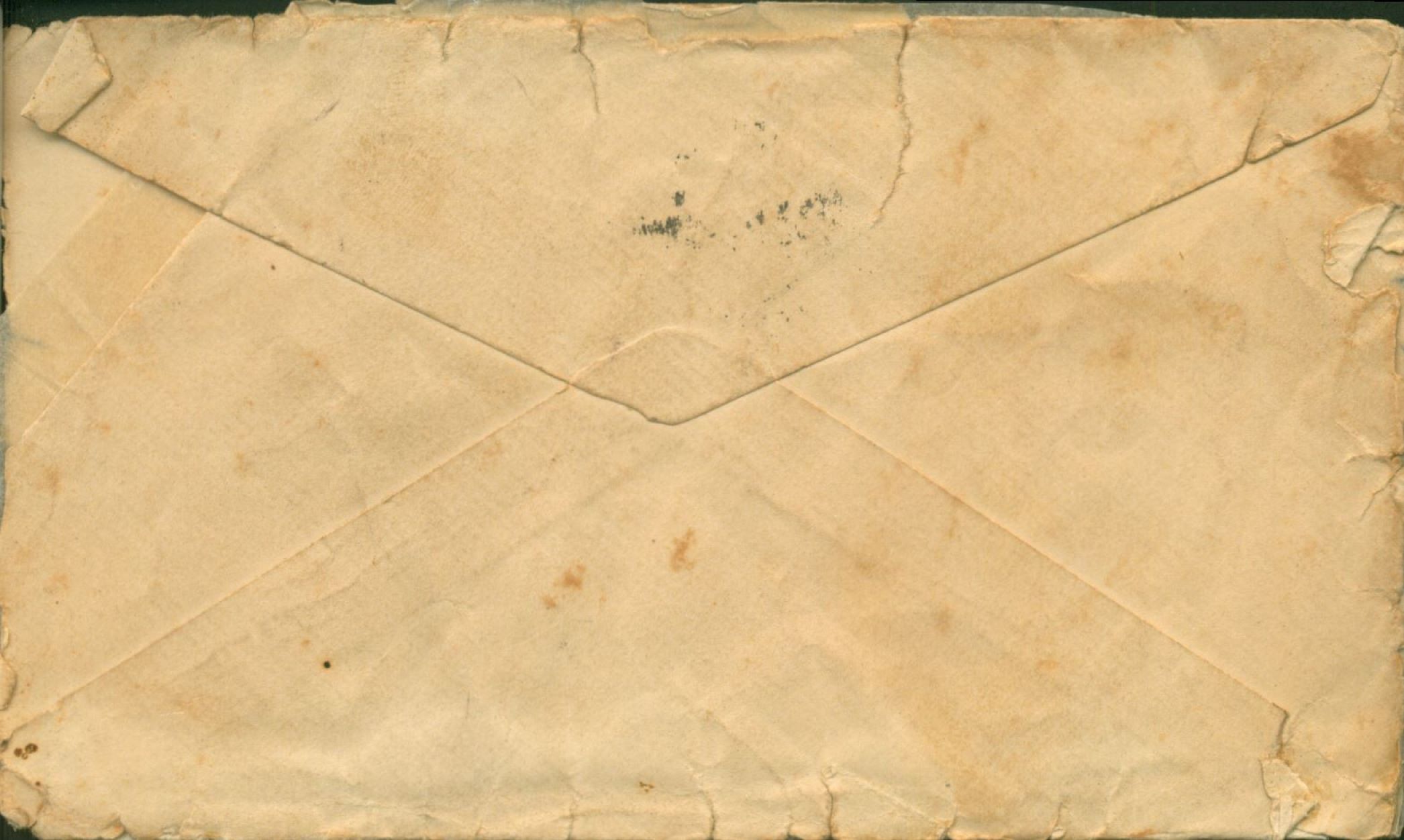 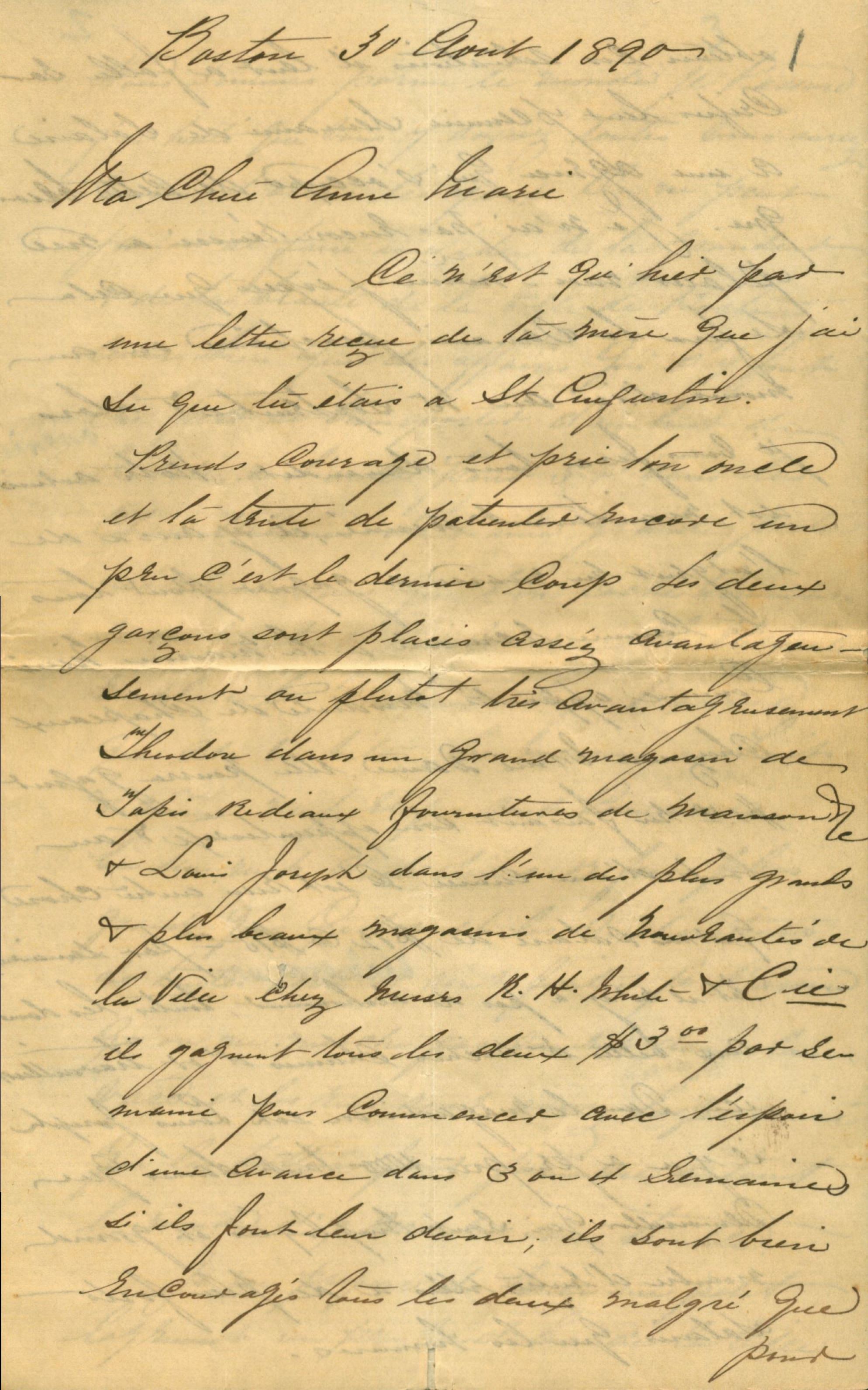 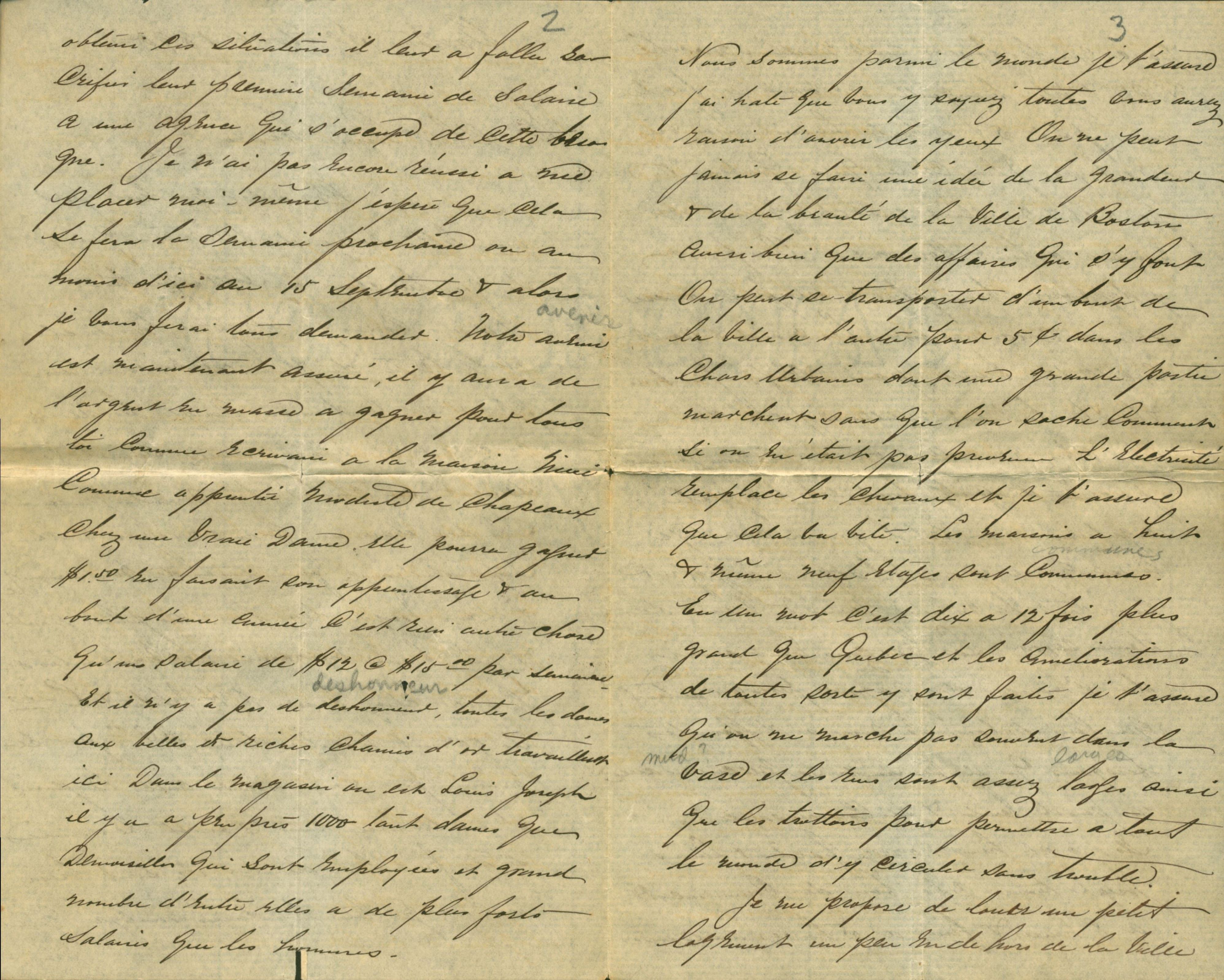 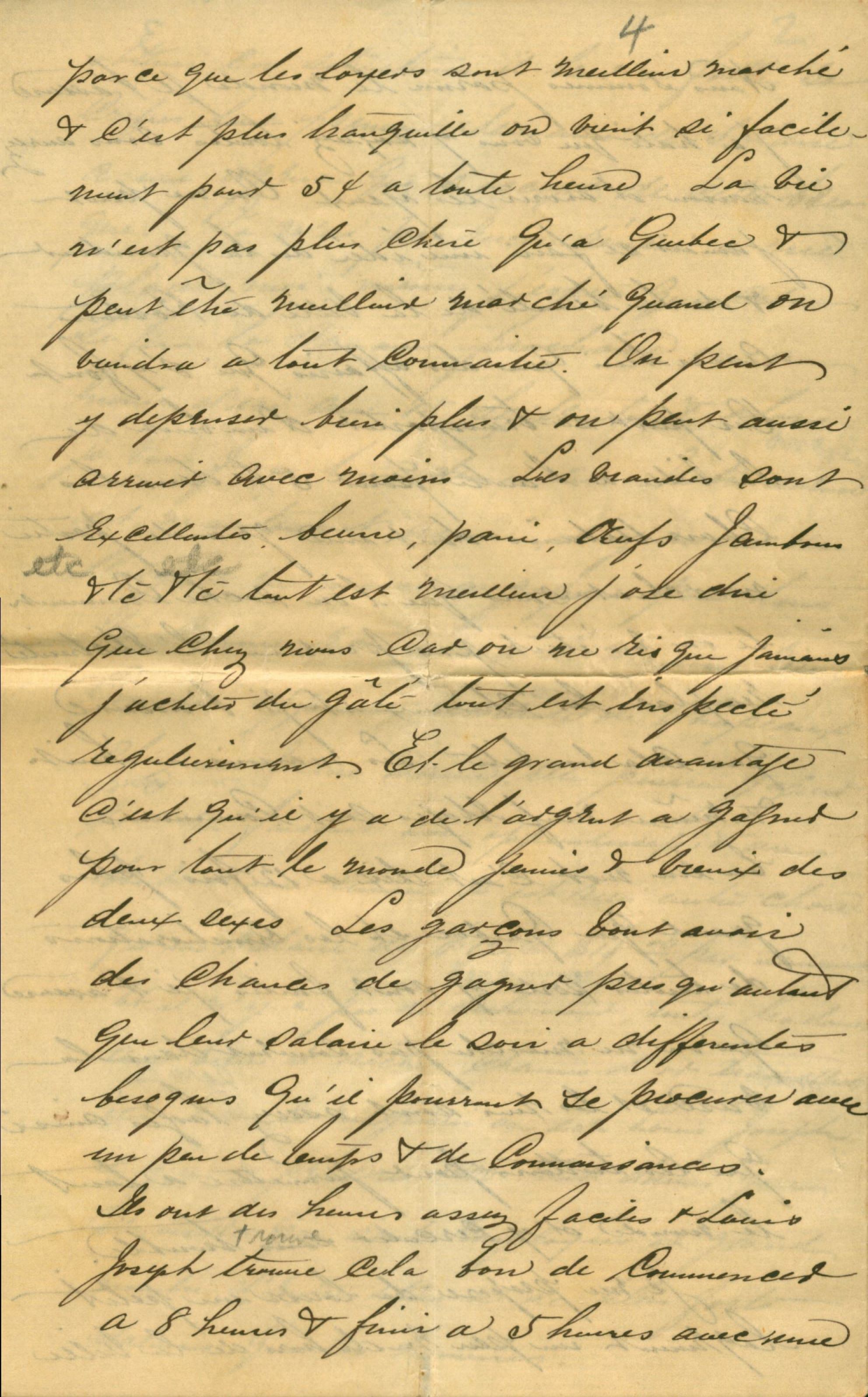 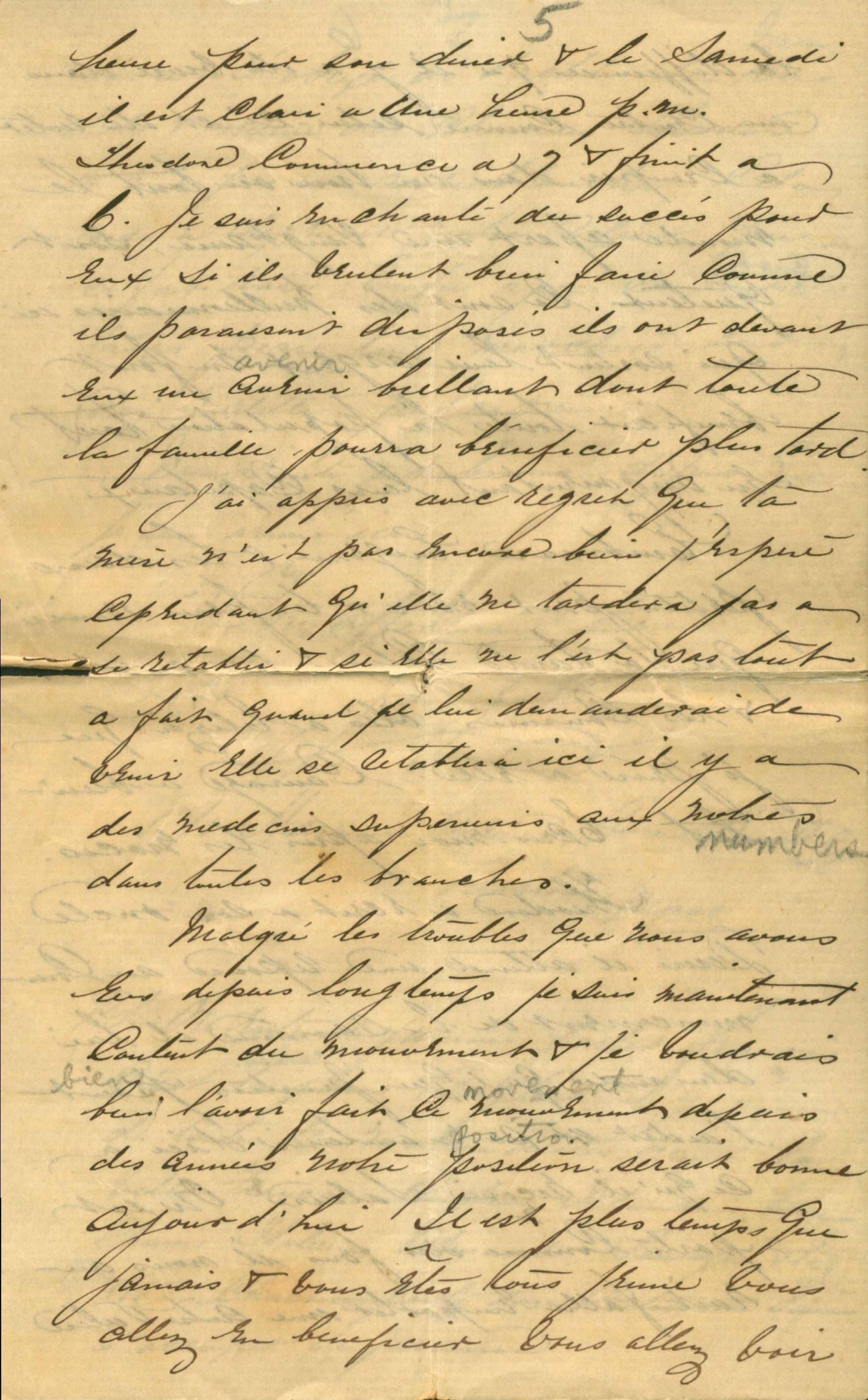 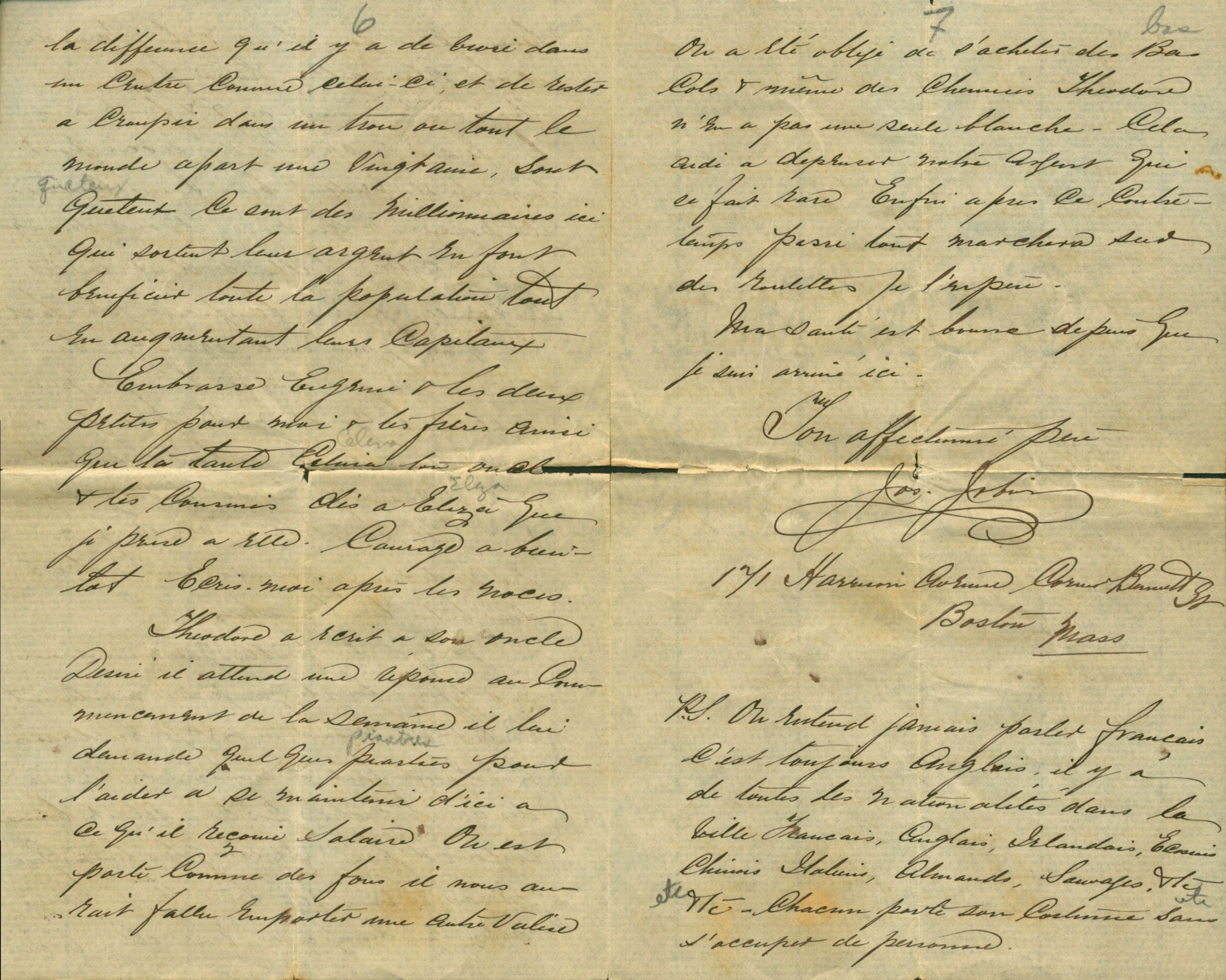 LETTER OF JOSEPH JOBIN TO HIS DAUGHTER ANNE-MARIE, after he and his two oldest sons had moved to Boston to prepare a place for the family. Letter dated Boston, 30 August, 1890, a week or so after their arrival. Life was hard in Quebec Province in Canada in the nineteenth century. Jobs were scarce for city dwellers. Those who lived in the country on farms could raise enough to live on, but money was practically nonexistent. Possibilities for advancement through education were few for young men, practically nil for girls. Joseph Jobin formed part of an "exodus" of about half the population of Quebec to New England and other places in the mid-19th century. This migration of French Canadians was to have significant social and political implications for the whole of Canada, and was resisted by Church and civil authorities. Joseph Jobin was an accountant by trade, and eventually did very well for himself as a clerk at the Jordan Marsh Company in Boston. His children, including his daughters, all got superior educations and did extremely well for themselves in the business and educational community—confirming the wisdom of the family's move to the United States. Joseph Jobin died of tuberculosis at the age of 50 years in 1893» leaving his wife to care for their large family. Happily, many of the children were older by that time, and were able to contribute to the support of this immigrant family. (Following is a translation from the French.) Ann Marie was about 18 years old at the time of the letter

It is only through your mother's last letter, received yesterday, that I found out that you were at Saint Augustin. Take courage, and ask your uncle and your aunt to continue being patient for a little while longer, we're in the home stretch at last. The two boys have found pretty good jobs -- or rather, really excellent jobs: Theodore in a large department store which specializes in rugs, draperies, and furniture, and Louis Joseph in one of the largest and most exclusive department stores in the city -- R. H. White and Sons. Each of them earns $3.00 a week to start, with the hope of getting a raise in 3 or 4 weeks if they apply themselves; both feel quite encouraged by this, in spite of the fact that, in order to get the jobs, they had to sacrifice their first week's pay to an agency which specializes in finding jobs for people. I have not yet succeeded in finding work, but I hope to find a job next week, or at least between now and mid-September, and then I'll ask all of you to come down. Our future is now assured, and there will be plenty of money to be earned by all--yourself as a writer (secretary?) at home, Nini as an apprentice hat maker at the establishment of a Real Lady. She could earn $1.50 per week as an apprentice; and after a year it's nothing to make a salary of twelve to fifteen dollars a week. And there's no dishonor in this, all the wealthy women. ("women in their beautiful and rich golden blouses") work here. The store where Louis Joseph works there must be a thousand ladies as well as misses who work there, (i.e. married as well as unmarried), a great many of whom have higher salaries than the male employees. We are in the midst of high society, I assure you! I am really eager to see you all here as well. It will really open your eyes! You could never imagine the greatness or the size or the beauty of the City of Boston, as well as all that is going on here, the business going on in this place. You can get from one end of town to the other for five cents on the streetcars; if somebody didn't tell you before­hand, you couldn't tell how a great many of they were powered: Electricity replaces horses, and I assure you that they travel fast! Eight and even nine-story houses are common. In a word, the city is ten or twelve times larger than the city of Quebec, and all sorts of improvements are being made. I assure you that people don't often walk in the mud here, and the streets and sidewalks are wide enough to allow everybody to get around without any trouble.

I am intending to rent a small apartment a bit outside the city, because the rents are cheaper and it more quiet; you can get around so easily for five cents at any hour of the day. Life here is not more expensive than in Quebec, and everything considered, maybe even a bit cheaper. You can spend a lot, or one can make do with less. Meats are excellent; bread, butter, eggs, ham, etc. etc.--all are of better quality, I dare say, than back home, since you never risk taking anything home that is spoiled--everything is regularly inspected. And the big advantage is that there is money to be made for everybody, young and old, of both sexes. The boys will have the opportunity of earning almost as much as they make during the day by taking on night jobs which they'll be able to find with a little time and as they start to make connections. Their hours of work are pretty easy and Louis Joseph finds it good starting work at 8:00 and finishing at 5:00 with an hour off for lunch, and Saturday he is off at 1:00 p. m. Theodore starts at 7:00 and gets off work at 6:00. I am delighted with them for their success. If they wish to do well, as they appear to be inclined, they have before them a brilliant future, of which the entire family will benefit later on.

I learned with regret that your mother is not yet better; I hope however that she will not delay in getting back on her feet, and if she isn't completely better when I ask her to come she will get better here, there are superior doctors in great number in all sections of the city.

In spite of the hard times and troubles which we have suffered for so long I am now happy with the move and I wish that this move, had been done years ago. Our position would be good today. Better late than never and you are all young and will benefit from it. You will see the difference that there is in living in a Center like this one, as opposed to groveling in a hole where everybody except a handful of twenty are beggars. There are millionaires here who take their money and use it to benefit the entire populace, at the same time increasing their own capitol.

Kiss Eugenie and the two little ones for me, as well the brothers and Aunt Celina, your uncle, and your cousins. Please tell Eliza that I am thinking of her. Take heart--I'll see you soon. Please write to me after the wedding.

Theodore has written to his uncle Desire and he is waiting for an answer by the beginning of the week and he asks him for a few dollars to help him make ends meet from now and the time his salary starts to come in. We left like a couple of fools; we should have brought another suitcase. We had to buy socks, shirt collars and even shirts. Theodore doesn't have a single white one. This helps to spend our money, and we are now quite short of funds. Anyway, after this hurdle is overcome everything will go quite smoothly (“sur des roulettes", “on roller skates") I hope and trust.

My health has been good since I arrived here.

P.S. One never hears French spoken here—it's always English. All nationalities are found in the city--French, English, Irish, Scottish, Chinese, Italians, Germans, Indians [Native Americans], etc. etc. Each one wears his own clothing without bothering about anyone else.