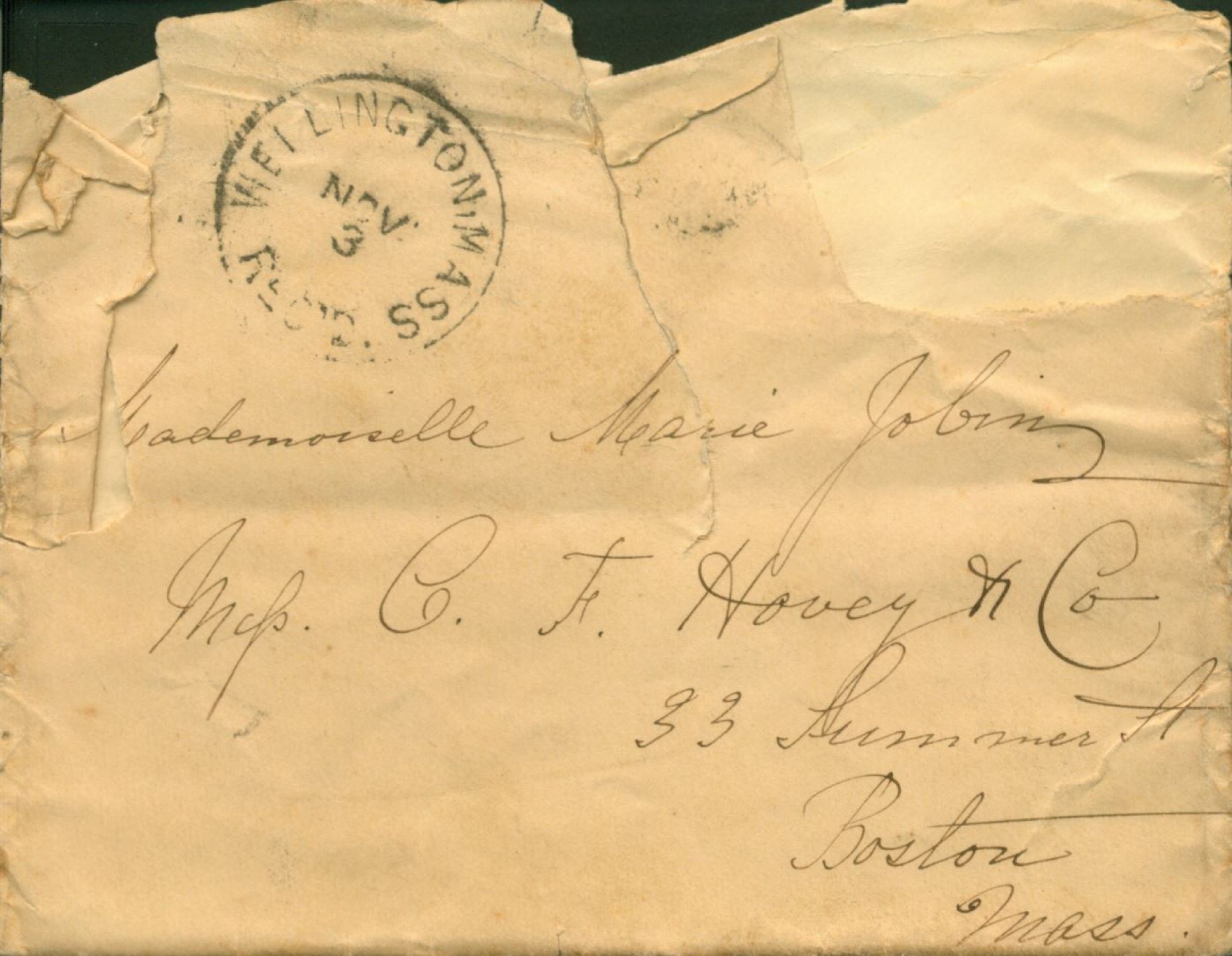 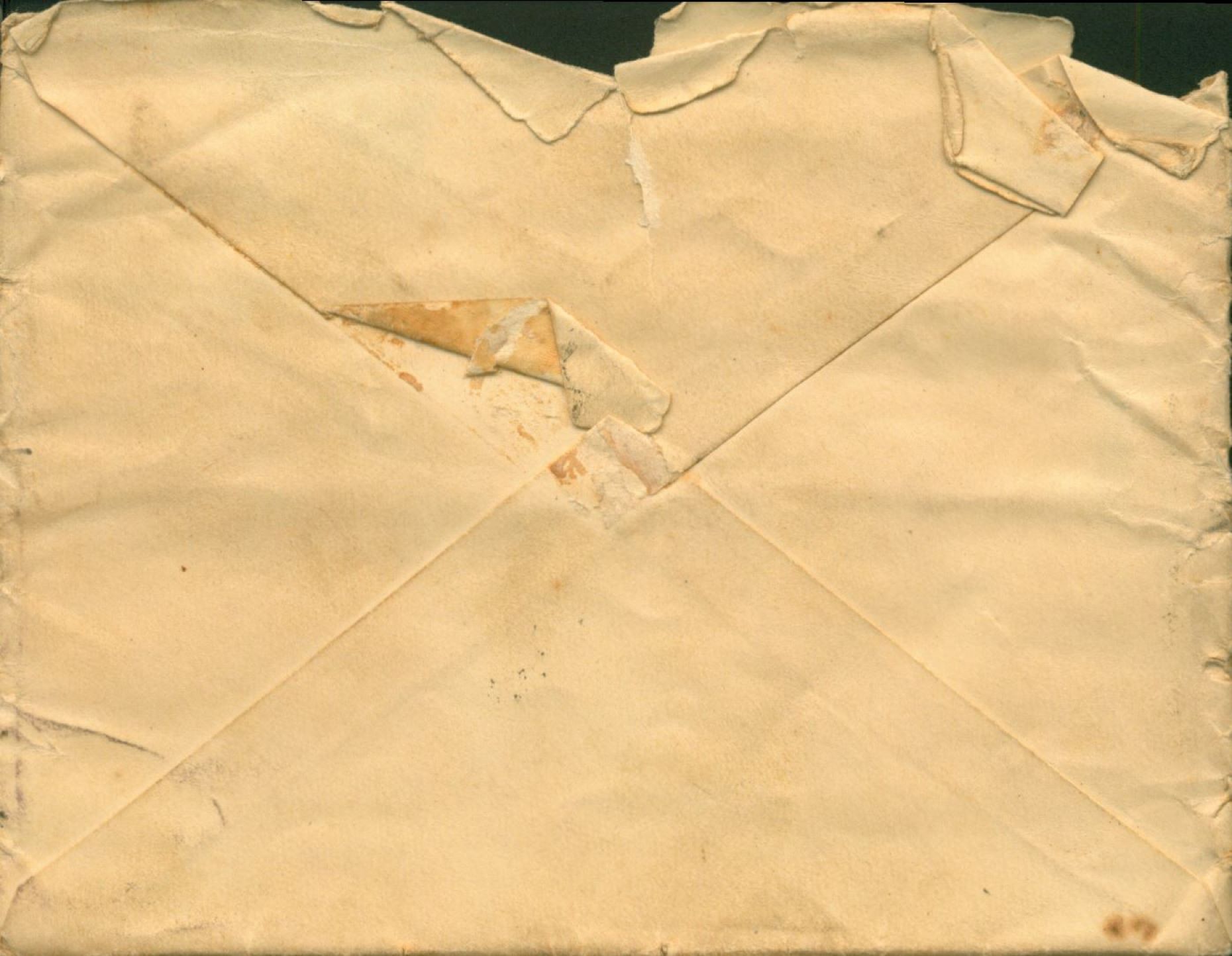 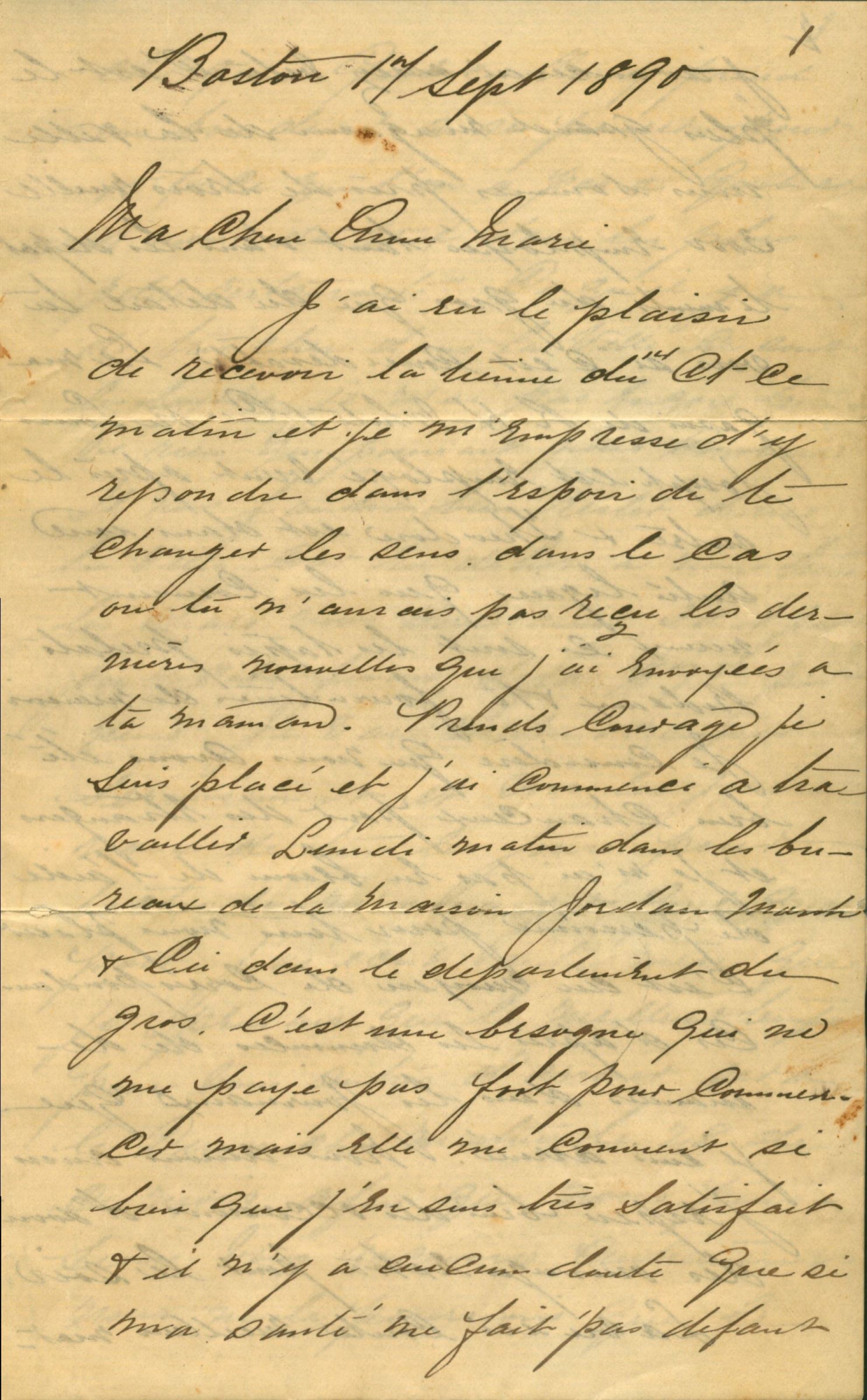 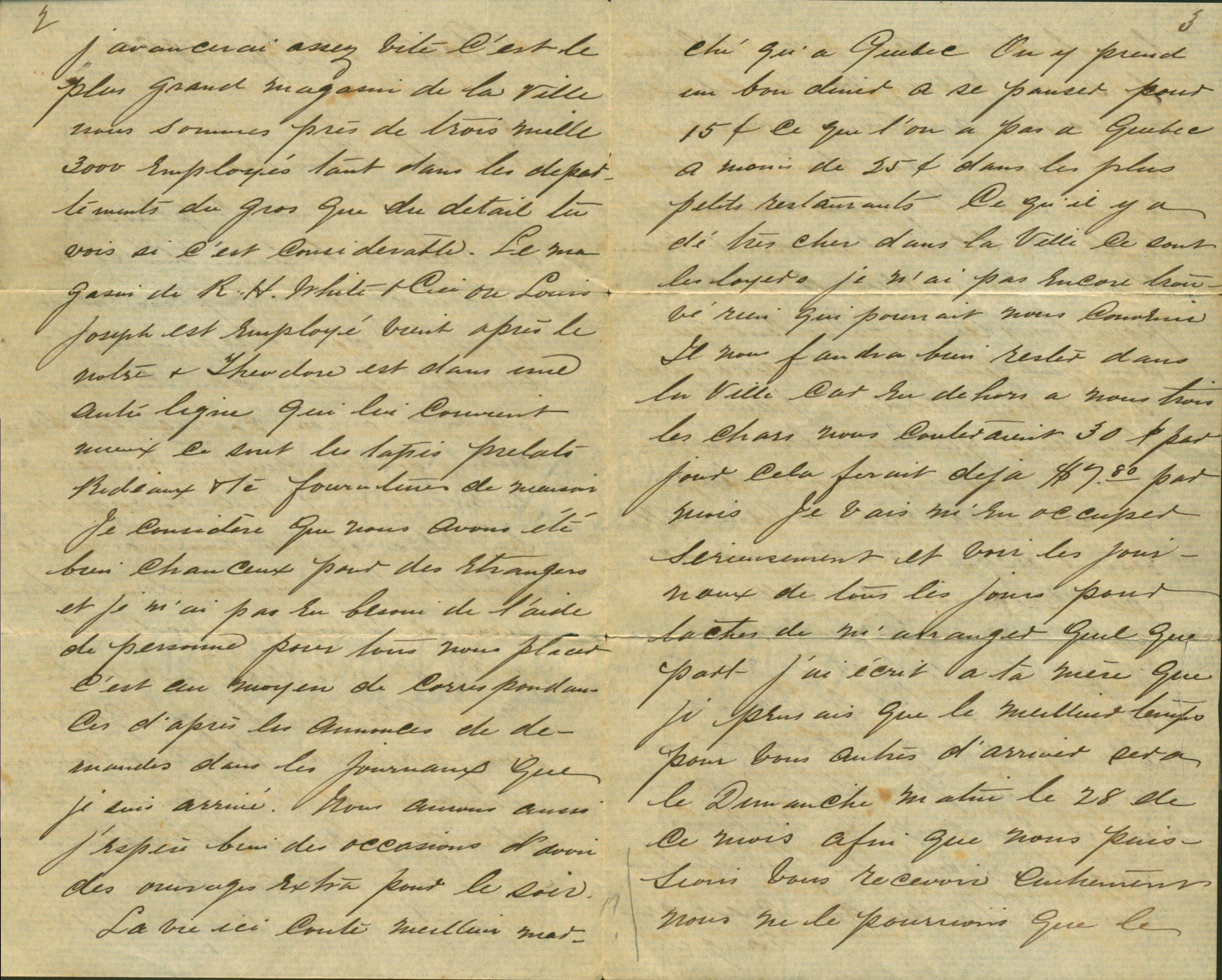 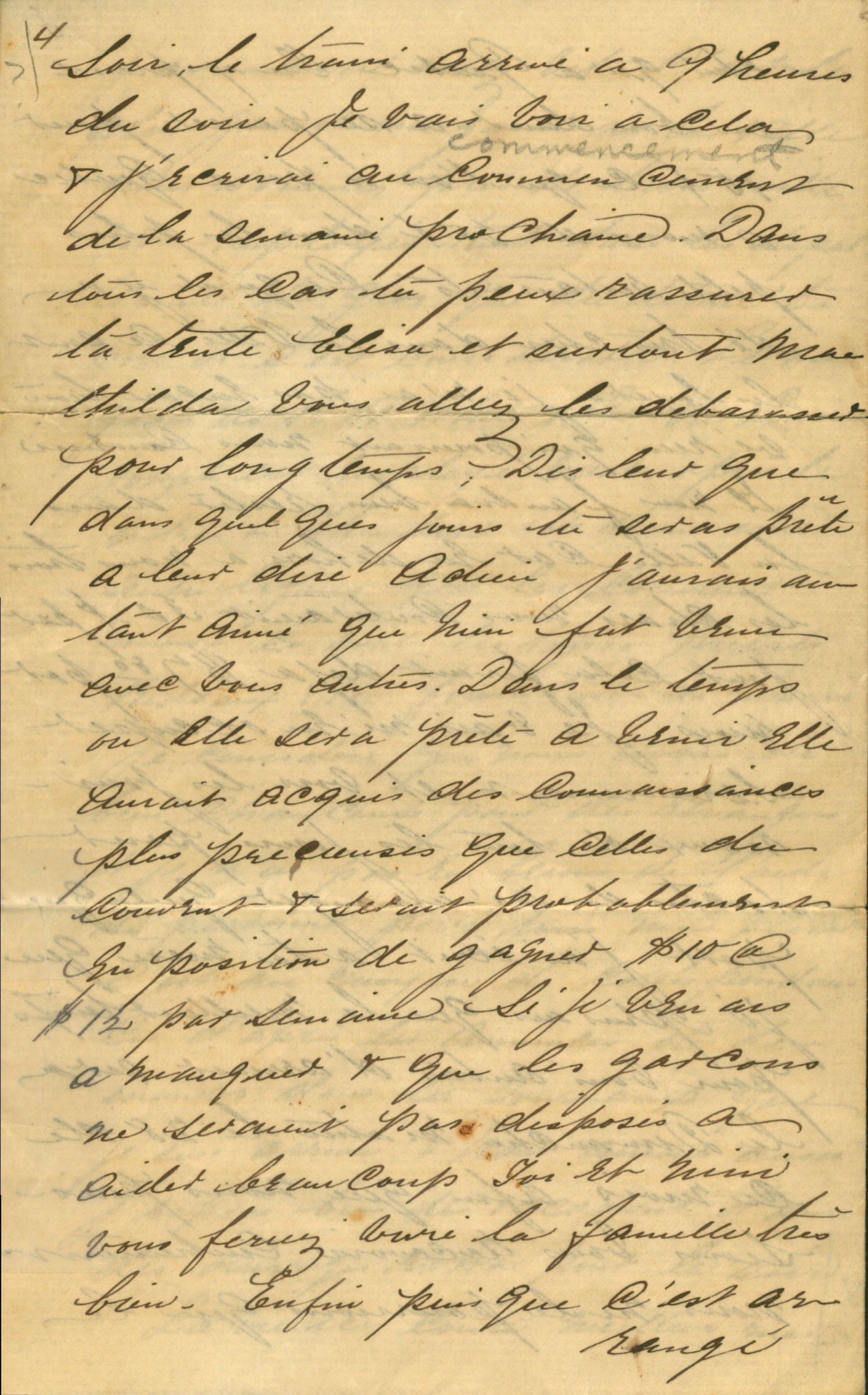 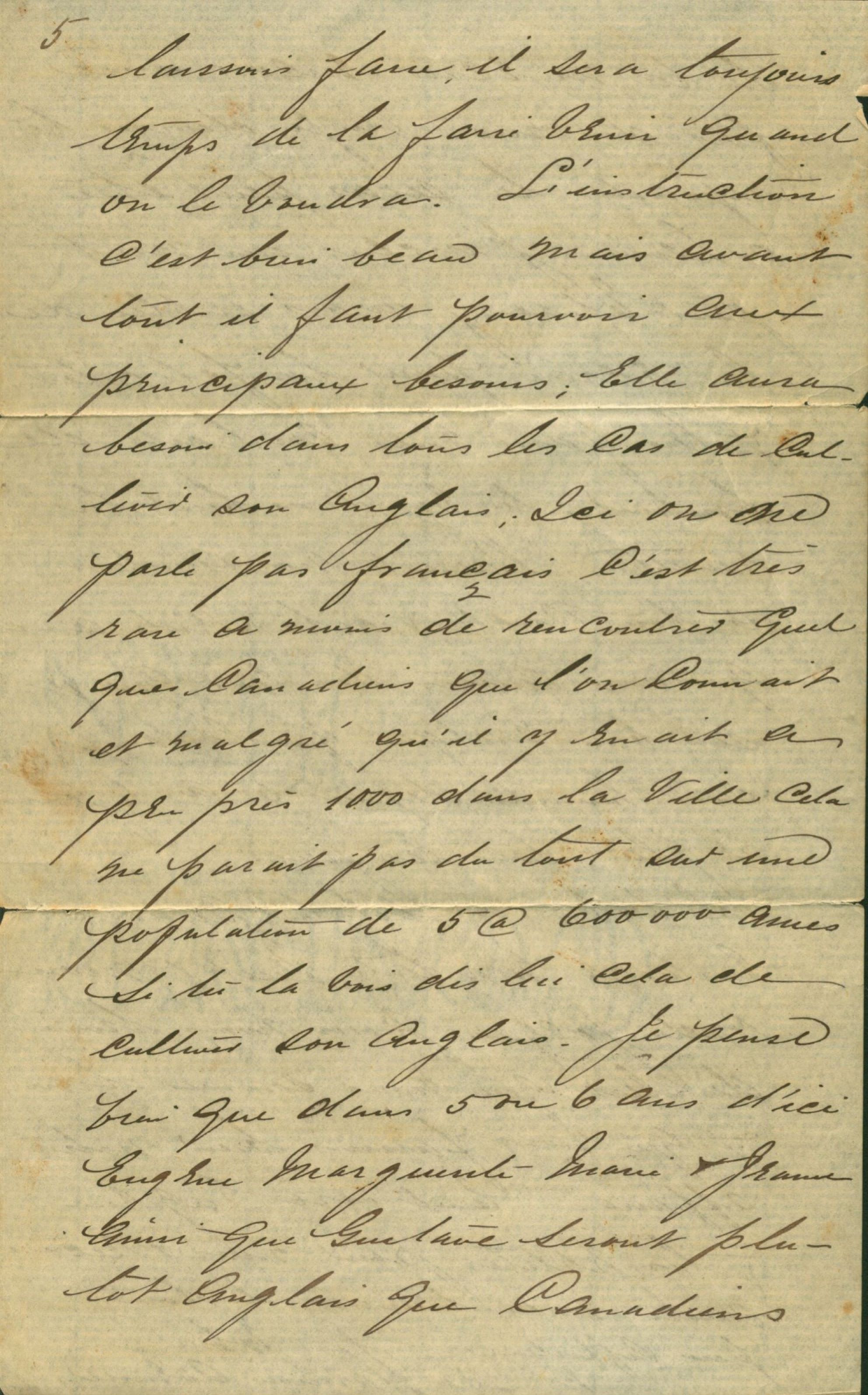 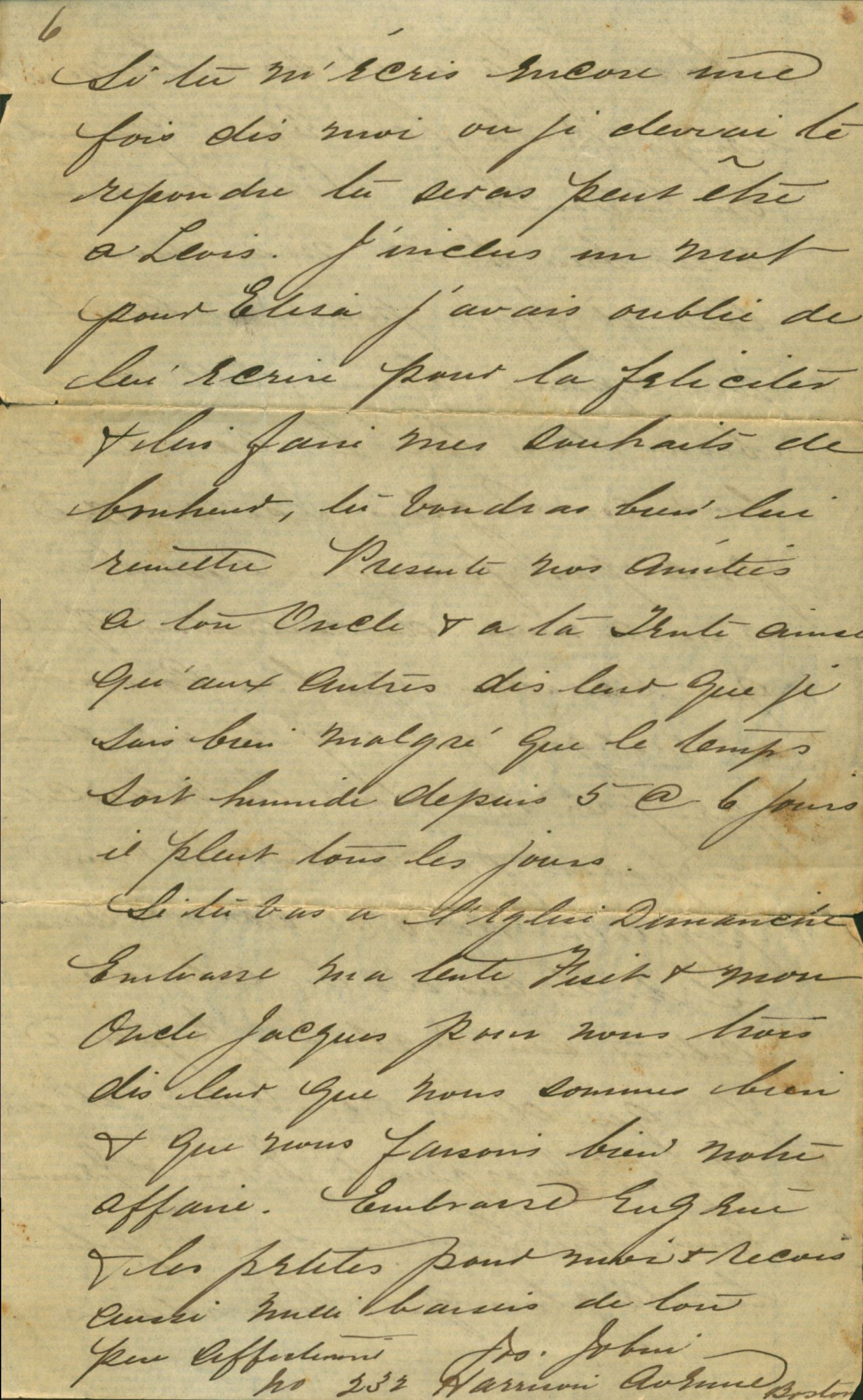 LETTER OF JOSEPH JOBIN TO HIS DAUGHTER ANNE-MARIE, dated Boston, 17 September, 1890. He writes to her from Boston, where he has very recently moved with his two sons, Theodore and Louis Joseph, to find work and a place for the family to stay, Anne Marie is in Quebec at the ancestral home in the parish of Saint Augustin, about eight miles from Quebec City, staying with an aunt and uncle. She is about eighteen years old. Eventually she would marry Paul Davies (about 1907). The marriage was an unhappy one, and they separated. Their one child, Paul Davies (known in the family as "Le Petit Paul", "Little Paul") died of appendicitis at the age of six or seven—in the days before antibiotics when such deaths were common. Anne Marie was a businesswoman, proprietor of the Belmont Realty Company, Providence, R.I. She lived with her unmarried brother Eugene at "the farm" in Oak Lawn (Crans­ton), the same place Estelle and Ralph Thibodeau went to live in 1952 with their sons Teddy and Philippe when hard times hit the Thibodeau family. All of that was far in the future, however, when Joseph Jobin, newly immigrated to Boston, painted for his family a picture of a new land of opportunity with the streets paved in sold.... So it must have seemed to him and to his sons when he arrived; and so it must have seemed to his family, when at last they were reunited… Ann Marie died in Oak Lawn in 1945.

I had the pleasure of receiving your letter of the 14th of this month this morning, and I hasten to answer it in the hope of changing your perception of things in the event that you have not received the last news which I sent to your mother. Take heart, I have a job and I started work Monday morning in the offices of Jordan Marsh and Co. in the wholesale department. It's a job which doesn't pay a lot to start, but I like the work so much that I am very satisfied, and there is no doubt that if my health does not fail I will be promoted quickly enough. This is the largest store in the city; we are about 3000 (three thousand) employees, so many in the wholesale department that you can see it's considerable. R. H. White and Co., where Louis Joseph works, comes after ours; and Theodore is in another line which he likes better: linoleum, rugs, draperies, etc.--household furnishings. In my opinion we've been quite fortunate for foreigners, and I needed no one's help to get us all jobs. It's through cor­respondence, by means of newspaper ads that I succeeded. Hopefully we also have some opportunities to get extra jobs in the evening after our daytime work.

Life here is less expensive than in Quebec. One can get a good dinner which really fills you up for fifteen cents, which you'd pay at least twenty-five cents for in the smallest Quebec restaurants.

What is really expensive in the city is the rents; I have not yet found anything which would suit us. We will have to stay in the city because among, the three of us we pay thirty cents a day for transportation and that would add up to $7.80 a month. I'm going to attend to it seriously and check the newspapers every day to try to get something somewhere. I wrote to your mother that I was thinking that the best time for the rest of you to come will be Sunday morning, the 28th of this month, so that we can receive you comfortably. The train may arrive at 9:00 at night; I will look into the schedule and will write to you at the beginning of next week. In any event you can reassure your Aunt Eliza and especially Mathilda that they will be rid of you for a long while; tell them that in a few days you will be ready to bid them "Adieu". I would have preferred that Nini would have come along with the rest of you. By the time that she is ready to come (Nini was 13 at this time and in the convent school at the Ursulines in Quebec--ed. note.) she would have obtained knowledge more precious than what she is receiving in the convent and would probably be in the position of earning $10 to $12 dollars a week. If I began to fail and the boys were not able to help very much you and Nini would be able to carry the family quite well. Any­way, since it's arranged let's let it be; we can always have her come whenever we want. Education is really great but before everything else you have to take care of basic necessities; she will in any event have to cultivate her English. Here people don't speak French. It's very rare, unless you meet someone who is Canadian, somebody you know... And even though there are about 1,000 Canadians of French extraction in the City it really doesn't show in a total population of five or six hundred thousand souls. If you see her tell her that--to cultivate her English. I imagine that in 5 or 6 years from now Eugene, Marguerite-Marie and Jeanne, as well as Gustave ("Gustave" was Antoine Jobin's baptism name.--ed. note.) will be more English than Canadian.

If you should write to me one more time, tell me where to write back--you will perhaps be at the Levis. I enclose a note for Eliza; I had forgotten to write to her to congratulate her and offer her my best wishes for happiness: please pass them on to her. Please give our love to your uncle and aunt, as well as the others. Tell them that I am well, in spite of the fact that the weather has been quite damp for the past five or six days; it has been raining every day.

If you go to church Sunday give Aunt Fiset and Uncle Jacques a kiss for the three of us and tell them that we are all well and are prospering. Give Eugene and the little girls a kiss for me, and receive also for yourself a thousand kisses from your affectionate father